St. Louis Post Dispatch (December 6, 2004) ~ Reflexology focuses on pressure points in the feet to ease stress and other conditions 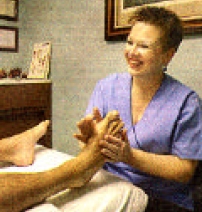 When is a foot rub more than a foot rub? When it’s reflexology, an ancient form of body work gaining in popularity as consumers continue to explore complementary therapies. Evidence supporting the value of reflexology is anecdotal, but the National Cancer Institute of the National Institutes of Health has funded a two-year study on whether reflexology can relieve pain in people with cancer. Meanwhile, practitioners in the metropolitan St. Louis area say interest here is growing, and two medical doctors say reflexology does have some merit.

Dr. Rick Lehman, a board-certified orthopedic surgeon in St. Louis, said he is impressed with some uses of reflexology. “I do a lot of work with Olympic athletes, and they use practitioners who practice reflexology and other pressure-point therapy,” he said. “What I’ve seen of it has been very positive – I’ve had athletes get better from it. A lot of these therapies get a bad rap because doctors who don’t understand the treatments say they are bad. I may not understand reflexology or know how to do it, but I’ve seen it work when used for soft-tissue problems” … [read full article]

Paula founded The Stone Institute LLC and its programs to empower individuals to make the best choices for their health and well being.

Paula Stone AA-Ed is an accredited reflexology instructor by the American Commission for Accreditation of Reflexology Education and Training.